In late December 2021, the US nationalist Rightist Steve Cortes tweeted a photo of Alessandria Ocasio-Cortez and her boyfriend Riley Roberts enjoying their Christmas break in Florida, commenting on it: “Her guy is showing his gross pale male feet in public – not at a pool or beach – with hideous sandals.” AOC quipped back on December 31: “If Republicans are mad they can’t date me, they can just say that instead of projecting their sexual frustrations onto my boyfriend’s feet. Ya creepy weirdos.” Her reply triggered mixed reactions – one user responded: “Bold move… when people disagree with my policy positions or call me a hypocrite, I tell them they just want to f… me as well.” Another responded, “Why did your mind automatically go to ‘dating you’ and ‘sex’? That’s very conceited.” 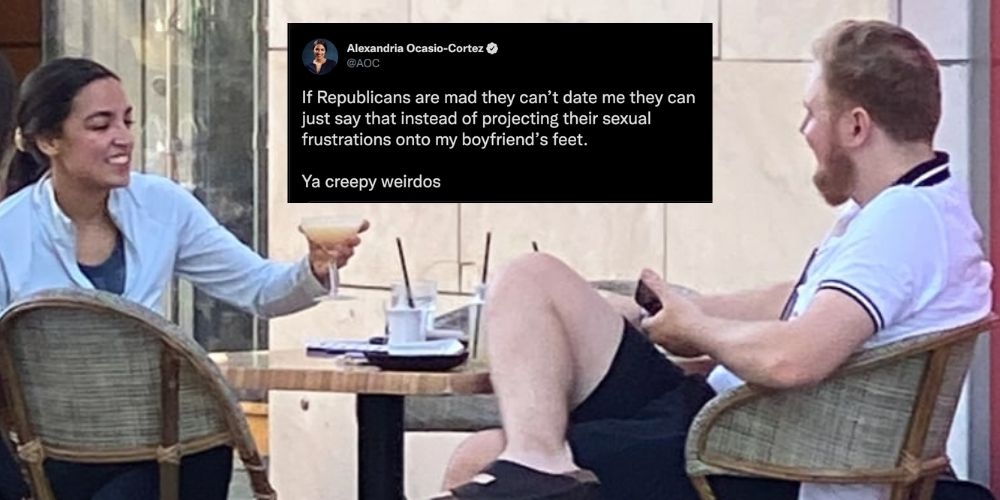 Alexandria Ocasio-Cortez was photographed on December 30 in Miami eating at Doraku Izakaya and Sushi​ with her boyfriend, Riley Roberts.

At some level these reactions are right: it was AOC who brought sex into a situation which was not sexualized (explicitly, at least), reading Republican attacks on her policy positions as the expression of their frustration that they cannot date her. Incidentally, I don’t think the reasoning implied by AOC is correct; there is another, more probable, version. Her Republican critics primarily disagree with her policies but, as most of men, notice her sexual attractiveness, so they bring in sexuality to devalue her argumentation, in accordance with the standard male-chauvinist wisdom that beautiful women are stupid: “Stick to sex, avoid argumentation which is beyond your league…” The implicit reference to feet fetishism (Riley’s foot really protrudes a little bit excessively in the tweeted photo) is even more ambiguous: Cortes (who made this move from AOC to Riley’s foot) could have made AOC mad for another unexpected reason – instead of really desiring her (as AOC’s reply suggests), he seems to prefer her partner to her. The implicit surmise of her reply could thus be: “I am the real beauty in the photo, so why do you mention my boyfriend’s foot and not me, its real focus?”

Such tensions indicate that a truly radical feminism should do what Amia Srinivasan proposes in her path-breaking The Right to Sex[1]: she thinks “beyond the parameters of consent” and is not afraid to confront sex in all its complexity and ambiguity. Consent? Yes, but why is it somehow always the woman who gives consent or denies it? Why should a woman not be the active part? Plus, consent relies on a logic of market exchange: “the idea of consent presupposes a contract: someone is asking to do something to you, and they have to get permission to do it,” so that consensual sex can also be exploitative. And what about my Unconscious which can make me desire what I do not know, including a desire to humiliate others and myself? What if suffering brings a perverse pleasure? And what about the social dimension of desire: is my intimate desire not always affected by public and secret social norms and expectations? The image of a sexual partner who is perceived as “desirable” obviously depends on the society in which I live… Srinivasan’s general conclusion: “We need a feminism that is truly internationalist, that centres on climate disaster, colonialism, and the voices of women in the global south.”

Here is such a case from the “global south,” the very opposite of the trifling AOC incident, a terrifying event that took place on January 26, 2022 in a New Delhi neighbourhood in India. A young woman, mother of a three-year-old child, was attacked by a mob in her paternal house, her hair chopped off and her face blackened; she was brutally slapped and kicked as others in the house clapped and cheered. The attack continued for several minutes as the woman pleaded for mercy, her body crouched and hands folded. After the beating, she was paraded in the narrow lanes of the neighborhood and dragged by the mob to her “victim’s” house where she was gang-raped. And who was her “victim”? The attack took place because the woman had repeatedly rejected the advances of a teenager who lived next to her parent’s house. The 16-year-old boy’s family claims he killed himself following the rejection in November last year; the teen’s death caused the purported “revenge attack”.

There are two notably shocking moments in this affair. First, a video shared on social media shows that most of the baying mob were women. When the brutalized woman was raped, the women in the same room instigated the men to be more brutal with her. Second, she was punished for refusing the boy’s advances, although she was married; as her sister put it, “she didn’t do anything.” One can imagine what would have happened if she were to concede and give the boy a so-called mercy-fuck – if found out, she would have been again found guilty and, perhaps, even more brutally punished. In short, she had a choice with both options spelling out a catastrophe for her… In the reactions to the accident, both these features are mostly accounted for in the terms of “internalized patriarchy”: in patriarchal societies women are taught that they’re ultimately to blame for any wrongdoing, and the scale of internalized misogyny is very large in India, where women are taught to uphold patriarchal structures.

However, this explanation runs all too smooth. It is ridiculous to account for the violence women exert on other women in the terms of internalized patriarchal values. Where are the intense envy, hatred and violence a woman can direct at her sexual competitors? While this dimension is obviously not part of some eternal “woman’s nature” but is historically mediated by the patriarchal order, this dependence in no way implies that a woman’s envy and violence directed at her competitors is somehow “inauthentic,” as if a woman is not able to desire and actively pursue a man and thus hate her feminine competitors. Furthermore, to make a woman responsible for a man’s suicide just because she didn’t gratify his (illicit) desire for sex, while simultaneously blaming her if she were to gratify it, attributes to women (at least those who are considered “attractive”) an extraordinary power which reduces men to helpless puppets. Why is not the 16-year-old boy blamed for not being able to resist his desire?

The true patriarchal moment of this horrible story resides also in the fact that the woman’s sexual desire is never mentioned in it: to be direct, what if she also desired an adventure with the young boy, but was prevented by her fidelity to husband? Many of those who stand in solidarity with her praise her for this fidelity. But did the same hold for her husband? Her sister emphasizes that she did nothing, but what if she were to do something in accordance with her desire, about which we know nothing? To put it in vulgar terms, she was beaten and raped because she refused to “act as a proper whore” and cheat on her husband – ironically, she was held responsible for NOT consenting to extramarital harassment. This perverted reversal is the hidden truth of patriarchal ethics.

Are we not here at the opposite end of the conflict around AOC’s boyfriend’s naked leg in Florida? Does AOC’s trip to Florida not appear a trifling minor affair compared to what happened in New Delhi? Yes, but there is something that unites the two cases: upon a closer look, they both challenge the obvious account that offers itself. Cortes’s critique of AOC as well as her reaction bring out not only the hidden male-chauvinist logic of the new Right but also the inconsistencies of the liberal-Leftist approach to sexuality. The scandalous affair in India is not just the outcome of “primitive” patriarchal traditionalism: it could only have happened in today’s mixture of traditionalism and modernity; only within such a mixture can a woman be perceived as endowed with extraordinary powers rendering men her helpless victim and, at the same, time as deprived of their own desire.

The conclusion to be drawn is thus that, while patriarchy and other forms of the oppression of women (even in the guise of false “permissiveness”) should be ruthlessly examined and punished, sexuality remains a big mess: it relies on rules and on their codified violations, so that it is impossible to fully regulate. We have to learn to live with its crazy paradoxes. We cannot be ever sure what the consequences of our interventions, as well-meant as they are, will be.

In January 2022, the Royal Opera House in London announced that it is “consulting with Ita O’Brien – an intimacy coordinator who ensures actors feel comfortable during such scenes – for Katie Mitchell’s new production of Theodora, opening on Monday. /…/ ‘There’s consent each and every day. You might agree one day that you’re very happy to kiss lip to lip, and then you develop a cold sore, so it’s not suitable any more. So you explore what the moment is about, different ways to tell the same story,’ she said.” While one should support the fight against any form of harassment, there are some details in this announcement that make me “feel uncomfortable.”

First, why, again, the (implicit) reduction of women to the status of victims of harassment here? Second, while, obviously, there are scenes in which playing a victim of rape or violence will make the actor as a person traumatized, how could one enact on screen or stage a brutal scene without feeling uncomfortable? Third, the example mentioned (“You might agree one day that you’re very happy to kiss lip to lip, and then you develop a cold sore, so it’s not suitable anymore”) is ridiculously obvious and has nothing to do with harassment. It throws a strange light on the entire argument by putting a cold sore in the same series with, say, touching a breast of an actress. Fourth, the very term “intimacy coordinator” sounds (and is) ominous: at the end of this road lurks the idea that (why not?) even when a couple is intimate alone but not sure about how to interact, they should hire an intimacy coordinator…

So, let me conclude with a lighter example, a misunderstanding that happened to a philosopher-friend of mine. A young fan of his, an attractive lady, told him jokingly after a lecture: “If you explain all this to me in private, you can have sex with me!” He took a restrained stance and explained things to her, but with no sex, claiming that doing it to get sex as a payment would amount to sexual exploitation… Later, however, he learned from her friends that, far from being impressed by his honesty, she was furious at him: she really wanted sex, and she just playfully mentioned the price he will have to pay to avoid the vulgarity of directly asking for sex. So, again, what if women are not just victims of male predators, but can also subtly provoke them? Any why shouldn’t they do this? Why should they just be passive receivers who either consent or don’t?