In capitalism as we knew it, when a severe economic crisis made impossible the system’s normal reproduction, some kind of authoritarian rule (usually a military dictatorship) was imposed for a decade or so till the economic situation was re-normalised enough so that a return to democracy could be tolerated again – recall the cases of Chile, Argentina, South Korea.

The unique role of Syriza is that it was allowed to play this role usually reserved for right wing dictatorships. It took power in a time of deep upheaval and crisis, it fulfilled its task of enacting tough austerity measures, and now it left the stage, replaced by a party called New Democracy, the same party which brought Greece to the crisis in the first place.

The achievements of Syriza government are mixed. It did some good things (which could have been done also by a reasonable centrist government, like the agreement with Macedonia on the change of its name), but overall the result is a double catastrophe. Not only did it do the job of enacting austerity measures – the very task its entire program was opposed to. But the perverse genius of EU bureaucrats was to allow a purportedly radical left party, Syriza, to own it. In this way protests against austerity were minimised. A government of the right would not have gotten away with it so easily.

Even worse, by enacting the austerity measures, Syriza de facto destroyed its own social base, the rich texture of civil society groups out of which it emerged as a political party. Syriza is now a political party just like the others.

When Syriza took over and engaged in negotiations with the EU, it was clear that the moment the only choice was austerity or Grexit, the battle was lost. Accepting austerity measures meant betraying the basic tenet of its program, and Grexit would have caused a further 30 per cent drop in the standard of living and a collapse of social life (lack of medicines, of food etc.) leading to an emergency state. We now know that Grexit was quite acceptable to the European financial elite: Yanis Varoufakis reports that when he mentioned Grexit as a threat to Wolfgang Schauble (at that time the German finance minister), Schauble immediately offered billions of help for Greece to do it.

What was intolerable for the EU elite was not Grexit but Greece remaining in the EU and mounting a counter-offensive there. From Schauble’s reaction, the idea was clear: the collapse caused by Grexit would have served as a good lesson to all leftists not to play with any radical economic measures. The establishment likes a more radical left to take power every two to three decades, just to warn the people what dangers lie ahead along this path.

So everything hinged on avoiding this choice and finding a third way. Naively, we who supported Syriza thought they had a plan. In all the debates I had with them I was assured they knew what they were doing. Yet in spite of all the leftist critique of the brutality of EU pressure on Greece, the EU did nothing unexpected, the Brussels administrators acted precisely as we thought they would – and Syriza was left helpless. So what precipitated the double U-turn in July 2015?

The extraordinary reversal of one extreme into its opposite would bedazzle even the most speculative Hegelian philosopher. Tired of the endless negotiations with the EU executives in which one humiliation followed another, the Syriza referendum on Sunday 5 July asked the Greek people if they supported or rejected the EU proposal of new austerity measures.

Although the government itself clearly stated that it supported “No”, or “Oxi”, the result surprised them: an overwhelming majority of 61 per cent said no to European blackmail. Rumours began to circulate that the result – victory for the government – was a bad surprise for Tsipras himself who secretly hoped that the government would lose, so that a defeat would allow him to save face in surrendering to the EU demands (“we have to respect the voters’ voice”).

However, literally the morning after, Tsipras announced that Greece was ready to resume the negotiations, and days later Greece negotiated a EU proposal which was basically the same as what the voters rejected (in some details even harsher) – in short, he acted as if the government had lost, not won, the referendum.

Here we encounter the truth of populism: its failure to confront the real of capital. The supreme populist moment (referendum victory) immediately reverted into capitulation, into a confession of impotence with regard to the capitalist order – there is no simple betrayal in this reversal but the expression of a deep necessity. It is all too easy to speak of “treason” here, but we are dealing with a much deeper crisis of the left.

I remember how, in the debates around that election in 2015, I warned against the fascination with great public events – all the fuss about “one million of us at Syntagma square, we were all clapping and singing together”. What really matters is what happens the morning after when the drunkenness of the collective trance is over and the enthusiasm has to be translated into concrete measures.

“This is our world today, a world in which right wing populists enact welfare–state measures and the radical left does the authoritarian job of imposing austerity. Will a new left find a way out of this deadlock?” 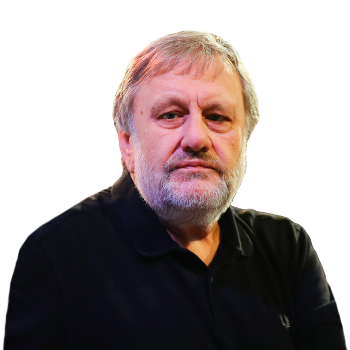