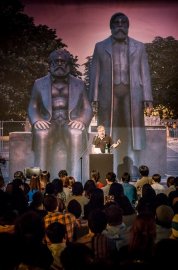 A number of the world’s most influential thinkers are coming to seoul. as phenomenal as it is for them to all gather at the same place, it is the very first time they are meeting in the peninsula to discuss the issues of contemporary philosophy. a non-everyday “event of philosophy” stands by right around the corner. this group of distinguished minds including ALAIN BADIOU, SLAVOJ ZIZEK, and WANG HUI will discuss the most urgent matter of our time.

What is this issue of utmost urgency? what is this subject matter which requires not the suggestion nor participation of an impetuous alternative, but the brake pedal to the metal by the foot of a most sincere contemplation? as ZIZEK stressed, it is projecting the tomorrow of global capitalism that governs our today. The cause of systemic substitution lies in hostile relations which are unsolvable by old criteria.

While ZIZEK’s fatal four threats – ecological catastrophe, the inappropriateness of the concept of private property in the discourse of intellectual property, the socio-ethical implications of contemporary scientific development, and newly generated apartheids and slums – to the sustainability of global capitalism, “the commons” meets the eyes of insight: the ecosystem as a common human habitat, knowledge as a common, scientific aspects as a common, and humanity as a common. A global resistance to prevent the privatization of these commons is in action, with the proliferation of a trans-stratous collective comprehension that disregard means dispossession in the plot of this dramatic demonstration.

BADIOU and ZIZEK have already exercised a series of conferences on this theme in three metropolises: london, berlin and new york, making seoul the fourth. Why seoul? the answer cannot be more obvious, for asia has been playing a key role in global capitalism. For BADIOU and ZIZEK, korea’s development and status quo has been a significant event in particular. There could not be a better city than seoul to discuss the Asian piece of the puzzle. Seoul is no longer merely an ordinary korean city, but an ascending interest of the world’s most sober minds.

Seoul, the city of desolate consumption will reform into an arena of reason and reflection. this academic-active practice will provide us with the opportunity to rethink the commons which we must consider and conserve together, combined with a chance to collectively assess Korea’s present and future. It will aim for efforts toward a new society by the name of “The Inoperative community,” going beyond a nationalism which confines and impedes its people, namely you and i. With the assemblage of refutes to the current flow of history, the gates of the path in the right direction will open.

The sad fate of Syriza